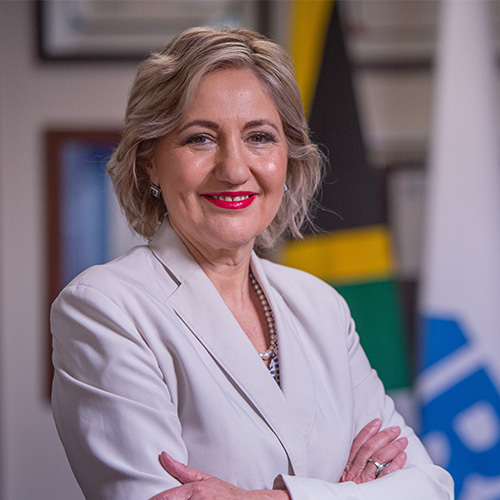 Update on the COVID-19 pandemic – where are we now and where are we going
(The state of the pandemic in August 2022, vaccinations, future scenarios) Director of the Centre for Medical Ethics and Law, Stellenbosch University How to build climate-resilient primary health care – what the family doctor should do.
(Declaration on family doctors to respond to climate change.) Single patient viewer, creating and analyzing big data in the public sector
(Innovations that have been made as a result of COVID and will help us going forward – the 3rd and 4th industrial revolutions

Telehealth for GPs and primary care
(Innovations that have been made as a result of COVID and will help us going forward – the 3rd and 4th industrial revolutions, implications for the future.) Remote patient monitoring
(Innovations that have been made as a result of COVID and will help us going forward – the 3rd and 4th industrial revolutions, implications for the future.)

An NRF A1 rated scientist, CEO and President of the South African Medical Research Council (SAMRC), Professor Glenda Gray is a qualified pediatrician and co-founder of the internationally recognised Perinatal HIV Research Unit in Soweto, South Africa. Prior to her appointment at the SAMRC, she was the Executive Director of the Perinatal HIV Research Unit, an affiliate of Wits University.

Glenda’s global profile includes a role as Co-PI of the HIV Vaccine Trials Network (HVTN), a transnational collaboration for the development of HIV/AIDS prevention vaccines. She is also Director of International Programmes for HVTN and Chairperson of the Board of the Global Alliance for Chronic Diseases, and a member of the Institute of Medicine of the National Academies, USA.

She received South Africa’s highest honour – the Order of Mapungubwe – for her pioneering research in PMTCT. Other prestigious accolades include the Nelson Mandela Health and Human Rights Award for significant contributions in the field of mother-to-child transmission of HIV. Selected as one of Time’s 100 Most Influential People in the World, Glenda is a recognised leader in her field. Her qualifications include an MBBCH, FCPaeds (SA), DSc (honoris causa SFU), DSc (honoris causa SUN), LL.D (Rhodes).

Dr Crisp is a medical doctor and public health specialist who has for many years focused on health management consulting across the African continent. He was Superintendent General (HOD) of the Department of Health and Welfare in Limpopo where he served from 1995 to 1999.

Dr Crisp was then a self-employed consultant and has worked on projects in several African countries including South Africa, Nigeria, Ghana, Lesotho, Botswana, Namibia and Tanzania. In 2009 he served as Special Adviser to Minister Barbara Hogan. He was intimately involved in the establishment of the National Health Laboratory Service (NHLS), the transfer of the medicolegal mortuaries from police to health and the creation of the Forensic Pathology Services, and in the establishment of the South African Health Products Regulatory Authority (SAHPRA).

He is now employed as Deputy Director General: National Health Insurance, and like everyone else was diverted to support the Covid19 response for a while.

Keymanthri Moodley is a Distinguished Professor in the Department of Medicine and Director of the Centre for Medical Ethics and Law, Faculty of Health Sciences, Stellenbosch University. The Centre was designated as a Collaborating Centre in Bioethics in 2019 by the World Health Organisation (WHO), one of twelve in the world and the first on the African continent. Keymanthri is also an Adjunct Professor in the Department of Social Medicine, University of North Carolina-Chapel Hill, USA. She is a specialist family physician, bioethicist and an NRF rated researcher. To date, she has been awarded grants to the approximate value of R68 million. The Centre has trained 40 mid-career professionals from 10 African countries in bioethics and currently has 8 PhD trainees. Keymanthri serves on the Scientific Advisory Committee of EDCTP. Her most recent NIH funded research project explores ethical, legal and social issues in Data Science Innovation in Africa.

Dr Rubeshan Perumal is a pulmonologist and senior scientist at the Centre for the AIDS Programme of Research in South Africa (CAPRISA) and the University of KwaZulu-Natal, where he leads portfolios in COVID-19, tuberculosis, and HIV research. He holds master’s degrees in Public Health (MPH in Epidemiology), Medicine (MMed in Internal Medicine), and Pulmonology (MPhil in Pulmonology) and is currently completing a PhD focused on the pharmacokinetic-pharmacodynamic optimisation of tuberculosis treatment. He is a past recipient of the Fogarty International Clinical Research Scholarship and was named a Global Young Physician Leader by the InterAcademy Partnership. He was a founding consultant of the Post-COVID-19 Lung Disease clinical service and research programme at Groote Schuur Hospital/University of Cape Town, has been a panellist on the WHO Working Group on Care Pathways for Long COVID, and serves as co-chair of the Global Virus Network Taskforce on Long COVID.

Mark Heywood is a writer and social justice activist, editor of Maverick Citizen, co-founder of the Treatment Action Campaign and SECTION27 and an Adjunct Professor at the Nelson Mandela School of Public Governance at the University of Cape Town.

Bob Mash is the President of the South African Academy of Family Physicians and led the development of our new position paper on the contribution of family physicians to the health system in South Africa. He is a Distinguished Professor of Family Medicine and Primary Care at Stellenbosch University and Executive Head of the Department of Family and Emergency Medicine. In addition he is Editor-in-Chief of the African Journal of Primary Health Care and Family Medicine and Chair of the global Primary Health Care Research Consortium. He has edited a number of books including the “Handbook of Family Medicine” and the “South African Family Practice Manual”. He has worked as a family physician for many years in Khayelitsha, Cape Town.

Mayara Floss is a Brazilian Family Doctor, writer, poet, filmmaker and activist. PhD student in Pathology at the University of São Paulo (USP). She was the junior author of the policy brief recommendations for Brazil of Lancet Countdown 2018 and 2019.  Rural Seeds creator and Ambassador.  Member of the WONCA Environment and executive member of the WONCA Working Party on Rural Practice. Creator and coordinator of the Planetary Health and Planetary Health for Primary Care MOOC.

Fascinated by the intersection of healthcare, science and business, Vuyane evaded the conventional career path in medicine in order to explore new frontiers in healthcare delivery. In 2018, he set about building a team that would launch an innovative digital healthcare company pioneering premium hospital-at-home services, Quro Medical.

Vuyane is also the founder of MH Foundation, an educational non-profit organisation that identifies and nurtures academically talented learners from socio-economically underprivileged neighbourhoods in South Africa.